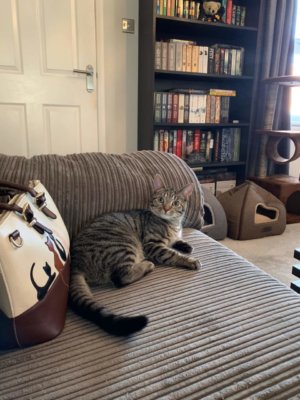 Cat Sitting Season has well and truly kicked off!

And this year it’s early..

It usually starts to really pick up around Easter, but for some reason this year it has started for me in February. I have regular puss cats that I take care of when their hoomans work away over night or perhaps get called to work at a remote office so there’s hardly a week that goes by that I’m not setting off early to sort out breakfasts. (Honestly, I have the best ‘job’ in the world!).

So I thought it might give you an insight into one of my days. I must stress that I limit the number of bookings I take on a daily basis to a maximum of 2 separate bookings (so that’s 2 different houses if you see what I mean!). Anyway, here we go..

Nice easy start with the gorgeous Suki and his new mate JJ (or Ginge as we call him!). I first met Suki last summer (2019) and we’ve been firm friends since. His hooman asked for a tea-time visit on the day she left, then 2 visits per day for the next couple of days.

Suki is a big fluffy bundle of love, and he’s very particular when it comes to ear scratches and head rubs – he made that quite clear in the summer. He’s such a big softie.

JJ was a bit of a roaming cat until Suki’s hooman took him in, and he is such a loving feline! He loves nothing more than to climb on a knee and be fussed.

Early start to give Suki and JJ their breakfast. I start between 7:30 am – 8 am depending on what’s required. Suki doesn’t have a cat flap but he does like to have a wander outside on a morning so I wait until he’s had a sniff about before giving him his breakfast (JJ would eat you if you stood still long enough!). Both boys are quite clean so after a quick litter change, I endeavoured to get Suki back in. But he was having none of it! He scuppered away over the fence and was gone.

Now I wouldn’t usually fuss as he’s done this before and his owner said it might happen and that he’ll be fine but the weather was atrocious! I waited about an hour but it was clear he wasn’t coming back anytime soon so I let his owner know that I’d call back in at lunchtime (even though there wasn’t a visit scheduled until tea time – now who’s the softie?!).

12pm – same day. I’m also checking in on Enriqui and Essi today as their mum escapes for a few days. They are 2 beautiful Ragdoll’s and mum doesn’t like them to be left alone for too long as they’re indoor cats and are used to having someone around for most of the day.

Enriqui can be a little grumpy and lets you know when he’s had enough of you! Essi is quite the lady and a little shy but if she hangs around long enough she loves an ear scratch.

So checking done, all is well so it’s off back to Suki’s to let him in – and there he is, looking like a drowned rat! I took a towel from my bag (it’s like Mary Poppins bag!) and he let me dry him off before shooting upstairs for a well-earned nap.

Just as I was leaving my phone pinged with a new notification that someone else wanted to book me so I headed home to sort out a meet and greet visit for later that week and grabbed myself some lunch in the process.

5pm – same day. I grab my cat bag and I’m off again! Back to feed Suki and JJ, then off to feed Bonny and Lagertha – two 6-month-old Bengal kittens. I’ve been looking after the kittens since they were 12 weeks old and very tiny! They certainly know who I am, and I’m always greeted with loud purrs and meows. Both kitties are in heat so they’re a little more demanding than usual but a few lower back scratches later and they’re more than happy. After closing the curtains and settling them on the sofa I tiptoe out but as I get in my car both kittens are on the windowsill watching me leave and it takes all my willpower to not go back in for ‘just one more cuddle’!

Off we go, 8 am start to feed to kittens, and they are both starving! Whilst they’re feeding I clean the litter tray and have a tidy round ready for when their owner returns that afternoon. After breakfast we have full-on playtime, chasing balls, catching feathers and general mayhem! Reluctantly I leave (90 mins after arriving!).

12pm – Same day Back to check in on Enriqui and Essie and I am definitely winning Enriqui over as he lets me stroke him for a good while and follows me around as I top up their biscuits and clean their litter trays.

5:30 pm – Same day – Meet and greet. Before I accept any booking I insist that I meet the cats and their owners first. This is so important I think. It gives everyone a chance to get to know each other and for me to fully understand your cats needs. Where possible I try to replicate their usual routine so the cats remain calm and settled. Today it’s all about Patch and Shadow, 2 little kitties that have been rescued recently and it’s the first time mum has left them so it’s super important that I understand their needs and reassure mum that they are in safe, loving hands.

6 pm – Home! Time to give my own cats some attention!

So there you have it, an average few days in the life of… I have to confess that this really isn’t a job for me – it’s more of a vocation and I feel so lucky and blessed that I’m trusted with other peoples furbabies. 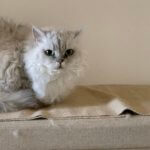 Shy Essi waiting to be fed 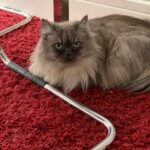 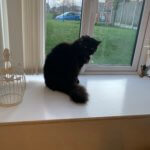 Suki deciding whether to go out 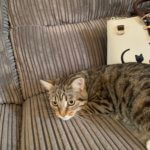 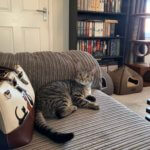 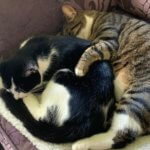 Jenson & Button taking it all in their stride